T.I. might just be the only â€œreal Atlantaâ€ rapper that ALL of Atlanta can proudly believe in. 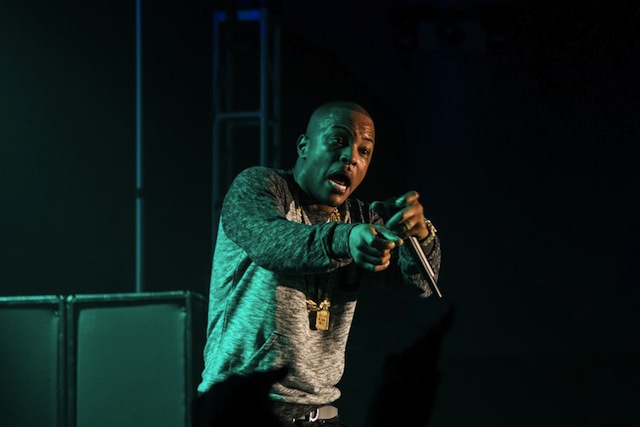 Click here to see a gallery of photos from the show.

T.I. has made pop songs with Rihanna and Justin Timberlake. He has starred in Hollywood blockbuster films, has become the most beloved TV dad since Bill Cosby, and saved suicidal people from jumping off buildings. Still, the Bankhead ambassador stays true to his trap music roots. So when it was announced that the three-time Grammy winner would headline an exclusive Tidal X concert at Greenbriar Mall on February 22, it made sense seeing as how T.I. always keeps the T.I.P. in him or close by.

For those who haven’t caught the wave yet, Tidal is a newbie music streaming service that Jay Z purchased in 2015. His wife, Beyonce, releases exclusive videos through the service. His one-time protégé and “little brother” Kanye West has opted to make his latest album The Life of Pablo available only on Tidal. Madonna, Alicia Keys, Jack White, Lil’ Wayne, and J. Cole are among the group of stars listed as co-owners. Tidal X is a concert series where subscribers are granted free access to the venue after showing the app on their smartphone, or they can watch from home through the service. Past performers have included Usher, Jason Aldean, and Jeezy who streamed his Thug Motivation 101 10-year anniversary show at the Fox Theater through Tidal last July.

“It was important that we bring this shit right back here,” T.I. said as he greeted the hundreds of fans who ranged from growing up in and still shopping at Greenbriar to ones who probably have never been to the mall or hadn’t been since high school. “This is where the trap started for us.”

Backed by DJ MLK and a live band, T.I. opened the show with “King,” the introductory track from his most recent album Paperwork. He followed with “Top Back” and a sparse, slow-crawling, almost a cappella rendition of his street anthem “Dope Boyz.” He dug deeper in his catalog and pulled out his first commercial single “I’m Serious,” which was fun to see as day one T.I. fans mouthed the words while younger, post-2006 fans were trying to figure out if the song was a new one, or an old one they'd never heard before. By the time he rolled into “You Don’t Know Me” it felt like a sophisticated trap concert. Throughout the night you would find your shoes getting stepped on by a sixth grader or bumped in the back by their mother, sometimes simultaneously. At other times favorite local politicians posted up mouthing lyrics such as: “I think it’s time I made a song for niggas who don’t know me /I  graduated out the streets, I’mma real O.G.”

“This is where I became a playa at y’all,” T.I. announced from the stage. “Before I started shopping at Lenox, Perimeter or Phipps Plaza, I was right over there in the food court at Greenbriar Mall!”

When the show came to the “something for the ladies” portion, T.I. took off his sweatshirt and pelvis-pumped and bedroom-eyed his way through “Private Show,” “Why You Wanna,” “No Mediocre,” and “Whatever You Like.” After that he quipped “Aight, time to get back to the rap shit” and performed “I’m Illy” and “Project Steps.”

Seeing as how the show started after the mall closed at 10 p.m., the crowd lulled away as it got later. But that changed when T.I. brought out Young Dro to perform his tandem of club hits “FDB” and “We Be In The City.” The crowd officially woke up when Young Thug, who's looking a lot more polished these days with his white veneers and not-so-dreadful locks, hit the stage with other members of T.I.’s supergroup, Bankroll Mafia.

The initial excitement tapered off as onlookers struggled to identify who was on stage rapping. For the record, it was Shad Da God, London Jae, and, sorry, still not sure who the other guy was. During this part of the show it was clear that even trap music now has somewhat of a generation gap. Trap Muzik 2005 fans who grew up on T.I. and Jeezy’s brand had a hard time deciphering the words that 2016 “trap music” fans of Thugger and Future understood clearly.

T.I. returned to the stage to announce that his tenth studio album The Dime Trap is on the way and would be released via his new partnership with Jay Z’s Roc Nation. He also informed the crowd that he is the newest part-owner of Tidal. Appropriately, he celebrated the news with a performance of his Jay Z-sampling hit “Bring ‘Em Out.”

The show closed with a medley of “ASAP,” “Motivation,” “Big Shit Poppin’,” “What Up, What’s Haapnin’,” and “Live Ya Life.” T.I. took a moment to mock himself and cock his Atlanta Falcons hat 45 degrees north and perform “What You Know,” and ended the set by brining Young Thug back out to perform “Ain’t About the Money.”

As the crowd dispersed, hoping that the rain would stop by the time they hit the door, conversations could be overheard proclaiming the show was for “the real Atlanta.” Seeing as how T.I. came in as the Dungeon Family/LaFace era was drawing to a close, led the charge during the initial trap era, sidestepped the “snap” era, survived the blog era, and is now navigating his way through another trap era and beyond, he might just be the only “real Atlanta” rapper that ALL of Atlanta can proudly believe in.

Click here to see a gallery of photos from the show.