Can the community-focused approach help an education system plagued by cheating and inequality? Perkerson Elementary in Sylvan Hills is a case study in the uneven relationship between neighborhoods and Atlanta Public Schools. The current principal delivered the school's pioneering dual-language immersion program. But a former principal made Perkerson one of the poster children for the lingering betrayal of the APS cheating scandal. Active parent groups work hard to build the community via the school, but young couples are still fleeing for suburban districts after they have kids.

Perkerson parents are among those expressing cautious excitement about APS' proposal to revolutionize the relationship between schools and communities. APS is applying to become a state-approved charter system, a decentralized governing model that hands a sizable amount of power to parents and communities. This proposed change is in addition to reforms under Superintendent Meria Carstarphen that have such input at their core. But the million-dollar question is whether a charter system will help boost the school system of a diverse city that is very much divided between the haves and have-nots.

"What I really love about the idea is that the community can come in and have more say about their school," says Perkerson parent and longtime Capitol View Neighborhood Association activist Paul Benson. He says it could change the literally old-school APS ability to "dictate to the community or shut out the community."

A charter system is frequently confused with charter schools. Unlike charter schools, a charter system does not involve privatizing schools or placing them outside the APS board of education's control. The system is similar to charter schools in its local autonomy and flexibility. It offers the ability to tailor the curriculum and school operations to suit specialty programs or other educational goals. In fact, such innovation is an expectation of the system.

Under the charter-system model, a governance team of parents, teachers, and community members makes major decisions at each school. That includes creating a strategic plan, setting the budget, and selecting the principal. The governance teams would replace the current, toothless Local School Councils and would be considered government bodies subject to open meeting, public records, and ethics laws.

The 2016-2017 school year will also introduce a new cluster system that essentially formalizes APS's feeder-school set-up. It was developed with extensive public input and will include its own form of governing board as well. If a charter system passes, clusters will be a key part of tailoring it in distinctive ways.

APS is already seeing huge interest from parents and neighbors, says Angela Smith, the APS official overseeing the charter system planning and other system-wide restructuring. Public meetings on the charter system have drawn 150 or more attendees, she says. Parents will show up and plug in "when you give people genuine input and engagement, and are not just talking about prom colors," she says.

The school system's new five-year strategic plan makes community engagement a pillar of APS decision-making. The charter system is the biggest and also the least certain of the coming changes, as the state could ultimately reject the application. But the entire reform discussion is happening because the state essentially demanded APS and other school districts adopt new systems if they want to maintain money-saving waivers to such state rules as class-size limits.

APS chose the charter system option in November, partly because it meshes with Carstarphen's agenda, and partly because parents and community members involved in a public input process supported it, Smith says. APS' application is due June 30. If it's approved, a year of planning would follow and 2016-2017 would be the first charter-system school year. APS would sign a five-year contract with the state to operate as a charter system, and would have to show improved student achievement over that time. Standardized testing would be one of many benchmarks used to determine success.

There are concerns about how powerful and representative governance teams would be in a city marked by strong racial and economic disparities.

"Everything within our school system has to be looked at [through] the lens of equity," says Erica Long, president of the Perkerson Parent Teachers Association and a member of the APS task force that chose the charter system model. "In many ways, we have two systems in APS," Long adds. She says that gap can be overcome with outreach to — and training of — parents.

Fulton County Schools' three-year-old charter system is a primary model for APS' application. Engagement has been high, says FCS Chief Strategy and Innovation Officer Ken Zeff, with every seat in the 100-school system filled, most in competitive elections.

"The popular narrative that parents won't be involved" in lower-income neighborhoods was false, Zeff says. "The challenge is really building that capacity and that skill set among the council [members]," he adds, but that's what extensive, state-mandated training is for. 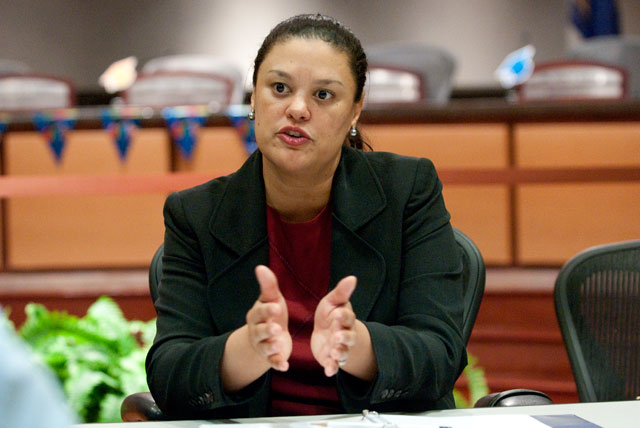 But the new system's flexibility also raises questions, Smith adds, such as how diversity is defined. It's also unknown how individual school governance teams will dovetail with another new form of governing body created to oversee each cluster.


The lack of details has triggered some anxiety. At the Feb. 11 annual gathering of APS parents and elected officials at the school system's Downtown headquarters, one resident noted that the phrase "local control" was once a code-word of segregation, and that many APS schools are still "light years apart" in resources. He echoed a frequently heard concern that the change is happening too quickly.

Smith says APS has little choice but to make some kind of rapid change if it wants to keep its waivers and stave off the state's newly announced school-takeover regime. She says that the charter system was chosen last year after extensive public meetings and that it meshes with Carstarphen's vision.

"The new superintendent is moving toward [reforms] like this, and this is not going to go away," Smith says.

At the Feb. 11 gathering, Georgia's School Superintendent Richard Woods acknowledged that the charter system is still a novel approach with many details to be worked out. But, he noted, it is an increasingly popular model with several examples around the state for APS to learn from, including systems with high poverty rates.

"We're [on] the same uncharted boat [trip] together, but I assure you we will navigate and arrive together," Woods said at the meeting.

"Parents don't always bring [professional educational] expertise to the table," he says. "Also, parents don't always agree. ... A greater role for parents may be a step in the right direction, but in order for it to work, parents have to be working with a strong school leader that they can trust."

Perhaps the biggest wound to mend is the cheating scandal, when many parents were told their children were doing well when the opposite was true. Atlanta City Council President Ceasar Mitchell says the new system is an "opportunity to reset the relationship between schools and neighborhoods."

Smith says she's hearing from parents at the planning meetings that the reform "makes [them] feel like [they] could begin to trust the system again." Beyond being a "healing process," Smith says, the charter system has a practical advantage: The state measures its progress more holistically rather than focusing on test scores.

"Under [late Superintendent Beverly Hall's] tenure, the whole cheating scandal was tied to [testing] targets," Smith says. "People were incentivized to do the wrong thing."

South Fulton: To annex or not to annex Article

In the hot debate over three south Fulton County communities — parts of Sandtown, Loch Lomond and South Oaks — seeking annexation into Atlanta, locals on both sides agree on one thing. By bringing two Fulton schools into the city, annexation could leave 1,650 county students...

Mammoth Ga. 400/I-285 interchange overhaul to include PATH trail Article

The state’s pending solution to notorious Ga. 400/I-285 interchange traffic is stubbornly car-centric and MARTA-free, a Spaghetti Junction II stack of flyover ramps. But in a literally trailblazing nod to alternative transportation, the Georgia Department of Transportation is adding a PATH multi-use trail to the mega-freeway.

Lobbied for by bike...

Fulton County Chairman John Eaves is asking the state Attorney General’s Office to review Keisha Lance Bottoms’ controversial double-duty service as an Atlanta City Councilmember and executive director of the authority that will oversee the sale of Turner Field.

What’s in a name? For Metro Green Recycling, it could determine the fate of its innovative recycling facility for construction concrete in northwest Atlanta's Bolton neighborhood.

The city says the facility slipped through permitting cracks last year without a special-use permit required for recyclers, and issued a cease-and-desist order that Metro Green will battle at a June 4 zoning...