There is a yoga pose called crow. To come into crow pose, you start with hands flat on the floor. The toes slowly push off the ground to help the knees hover next to the upper arms. The body is supported through the wrists, arms, shoulders, and back. In profile, the pose resembles a bird in flight. The line of the back appears like a raised wing; that of the legs and feet like tail feathers. Crow embodies transcendence.

On a Saturday at Fulton County Juvenile Court, about two-dozen youths are attempting crow. There are plenty of giggles and gasps and sighs of resignation. A few of the kids get it. At the center of the room is CJ, a teen demonstrating the pose at the end of the hour-long yoga session hosted by the Learning Club (TLC), a weekly extracurricular program for underserved youth. Founded a few years ago by Samuel Washington, deputy chief probation officer of Fulton County Juvenile Court, TLC includes tutoring and mentorship with AUC students, field trips, chess nights, and now yoga.

"I recognized that so many of our kids are doing so poorly in school, and I see a correlation between not performing well in school and getting into the trouble that brings them into the juvenile court," says Washington, who has been working in the local juvenile justice system for 21 years. "Yoga expands their minds and gives them options that they didn't know they had. We have a retired reading teacher who is working with the kids and the issues that they're having with reading. She noticed that after yoga kids are calmer and able to retain information better."

Yoga was introduced into TLC's programming after Robert Altman, co-founder of local nonprofit Centering Youth, which teaches yoga as a way of coping with trauma, presented the idea to a juvenile court judge. Washington agreed the program would be a good fit for TLC. The group of about 60 people, including Washington ("Don't ask kids to do things you won't do yourself," he says), has since gathered for yoga practically every Saturday for the last year and a half.

"Now seems to be the season for trauma. Children are experiencing trauma — something that has been overlooked, I think since forever, up until the last six months or so," Washington says. "Now we have a therapist who concentrates pretty much solely on evaluating trauma and providing trauma assessments for the courts."

Many of those who attend TLC's yoga classes are youths on probation. Plenty are not. Some are relatives who've come to show support or to have something to do on a Saturday. CJ was never on probation. He first began attending TLC with his cousin and has since excelled at yoga and become a role model for other participants. Centering Youth has hired CJ to assist the professional teachers during TLC's yoga sessions. 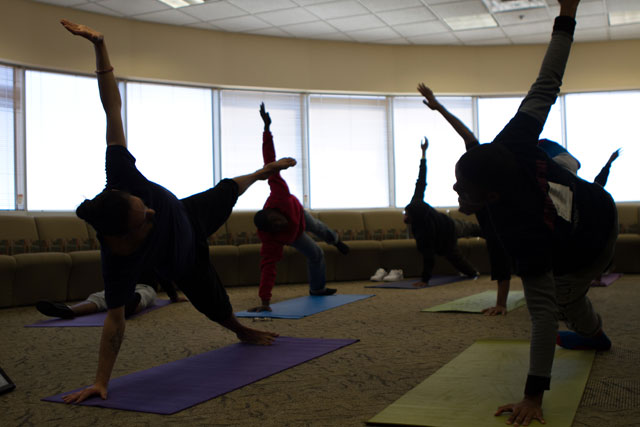 Centering Youth Co-founder and Director Holle Black, who's been practicing yoga for more than 20 years and is trained in yoga-based trauma therapy, has developed her own trauma-sensitive yoga training. Centering Youth also partners with other Georgia-based groups and institutions to offer prenatal yoga to women in prison as well as yoga services for victims of sex abuse and trafficking.

"I've found [yoga] to be such a healing aspect through different parts of my life," Black says. "When I became a teacher I started to learn the reason why and started cultivating an interest in giving back because it had done so much for me."

The yoga that Centering Youth's instructors teach is less focused on advancing to complicated poses than it is on awareness of the body — listening to the heart beat faster or slower, for instance — and emotions. The mindfulness learned through such practice can mean the difference between impulsive decision-making and informed decision-making, an important tool for the youths in TLC.

Through Do Good, Creative Loafing's ongoing series of partnerships with local nonprofits, Centering Youth aims to raise $5,000 to fund a full year of Saturday yoga for the Learning Club. (Here's info on CL's March 28 fundraising event.)

"Centering Youth pays our teachers so that we can really ensure that the teachers are highly trained, that they follow protocol, and that we have really low attrition," Black says.

Participation in TLC is optional — kids are often recommended for, but never forced into, the program.

"There is no limit as far as how long a child can participate in the Learning Club," Washington says. "Our hope is that after they complete probation they'll come back and help other kids through the process."

Centering Youth's yoga and mindfulness training at TLC has the potential to change how kids think about and respond to their circumstances. And that can impact the city.

"Can we help people to the extent where they become strong citizens in their communities instead of something that you know is hurtful or detrimental, and through their success can they represent success to other people?" Black asks. "Someone feeling good and powerful within themselves so that they can make better choices and then support their friends to make better choices, I mean there's no end to the reach. You could save someone's life. It's huge."